“Our film ‘Gr8ness’ has been selected to showcase at SXSW” 2020! Thanks to the team and VR For Good by Oculus.

A VR Documentary short: 70% of 20 million youth in South Africa have been victims or perpetrators of crime. Of every 100,000 youth,
37% have dropped out of school before matriculation. The documentary explores how these statistics can be changed by exposing youth to the opportunities of creative industries,
which are sadly not known by most at-risk youth of South Africa.
Ethan grew up in Muizenberg with his parents and siblings. Due to tough economic times, Ethan had to move to Grassy Park and live with his grandmother.
Through Ethan’s lens, we want to take the user on a journey to experience how the relationship between the child and mentor grows as they explore art and creativity together in Cape Town.
Special thanks to Oculus, VR for Good
Copy by: Black Rhino VR 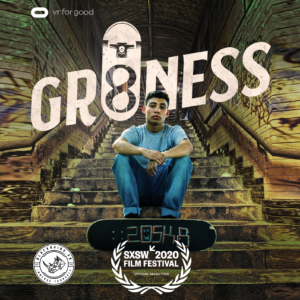 made possible by the collaboration of some awesome initiatives and creatives, headed by the Kenyan outfit Black Rhino VR and with the support of Oculus’ VR for good.

I was initially pulled on to this project when the production had run into issues regarding drone permits in Capetown, The team who was already on a tight shoot deadline and subsequently needed to re-create or re-place some establishing & moving shots without the use of a drone,

knowing of our work at Deep VR as one of the few cinematic 360° production crews,
The team at Black Rhino got in touch to find out what kind of solutions we could provide.

No sooner was I on a flight to Capetown with rigging & audio Wizard Samkelo Mahlalela from PixelWave Audio,

Armed with a Cable Dolly system, a 15m Mono-pod and every kind of camera arm accessories we could gather , we spent the next couple of days scouting and rigging ever increasingly challenging shots.

From trying to get a stable cable-dolly timelapse along the side of a windy mountain, to overhead hyperlapses while skaters try sync up tricks take after take.

Overall my role in this project was quite small, a couple days on shoot bouncing ideas, sharing production issues/solves. I loved the opportunity to work with 360° producers at the top of their game and as a lifelong skater I was so amped to share these two passions in 1 projects,

We were just a team of talented creatives making the best damn “sponsor me” tape we could with the latest techniques we can find, like I did as a kid, just so much better.

some behind the scenes imagery from the trip photographer : Lamek Orina
Check out his incredible gallery of the trip at Lamec Orina – Gr8ness

As someone who has worked with you I respect your grit, tenacity and professionalism plus you’re cool as hell. We all really enjoyed working with you. - Bryan Afande